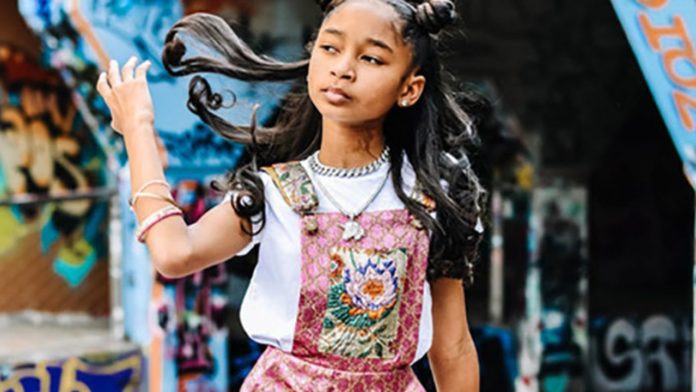 The 14-year-old rapper quickly rose to fame a couple of years ago following a series of freestyle raps that went viral. Her infectious energy and razor-sharp rhymes have garnered over 40 million views across her social media platforms. Since the age of 5, the rising star has been writing, singing, rapping, and producing music. Her musical talents have dazzled audiences around the world as well as Hip-hop’s heavyweights like as T.I. and 50 cent. The musical prodigy captured the hearts of millions with her viral freestyles filmed from the passenger seat of her father’s car.

At the age of 11, she became the youngest female rapper to sign a recording deal. In the fall of 2018, the preteen released her debut album, Tha Cheat Code, which she premiered on The Ellen DeGeneres Show. Now the rising star is coming to Nickelodeon.

The Houston rapper is set to star in her very own original self-titled Nickelodeon series, That Girl Lay Lay.

A post shared by That Girl Lay Lay (@thatgirllaylay)

The teen hip-hop sensation has dreamed about having her own show since as far back as she can remember.

“I am very excited,” Lay Lay tells JaGurl TV, “I felt like I finally reached my goal because that was one of my biggest goals on my goal list, to like, have my own TV show. I manifested it.”

The teen goes further to explain how she introduces positive energy into her life to help foster her dreams.

“On a daily basis, if I know I want something, then I just speak it out and say that I want it,” the musical prodigy says. “Or if it’s like a full moon, I do all my crystals, and I take a crystal bath. I might go outside and write the stuff that I want and then tell the universe that ‘I want this and I want that.’ And that [Nickoldoen Show] was actually one of the things that I wanted.”

Lay Lay credits her mother for helping her to understand the purpose of energies and crystals.

“My mom is into a lot of crystals,” the young artist explains. “She has a bunch of crystals, and on full moons, she does the same thing. So I took it from her, and I’ve been doing it ever since. It really helps you like to calm down, get ready for the week, the moon, the year. Because you know a full moon is like the restart of the month.”

The 13 part teen-drama series will follow Lay Lay, an avatar from a virtual affirmation app who is magically transformed into a teenager by her best friend Sadie. Together the two face the drama of Highschool and being teenagers as stumble down the path to find who they truly are. The rising star thanks her star-studded cast and crew for helping to write and portray her character on screen.

“I want to give a thanks to my writers, David Arnold and Mr. Ron Heart,” Lay Lay says. “They’re doing an amazing job. They make sure to keep me myself, to keep me Lay Lay. Which I like because I definitely didn’t want to go out of my element. So I’m glad that they kept me, me.”

The rapper also expressed excitement for working with Will Packer. Record-breaking producer Will Packer, who also produced Marsai Martin‘s Little, will be produce the upcoming series.

“I was really happy to hear that he [Will Packer] was going to be directing and producing my show,” Lay Lay adds. “I know it’s going to be a hit if he’s doing it.”

Although the rising star did not disclose an exact date, Nickelodeon’s new series is set to premiere this summer.

In addition to gearing up from the new show, Lay Lay recently released her new single “Breezy” featuring Young Dolph.

“That was really fun!” She says in reference to shooting the music video for the song. “Set was really long, the video shoot was very long. But it was really fun! I want to give a thanks to Young Dolph for doing a song with me, because a lot of artists say their going to do a song with me and never do it. So you know, I was like ‘He’s not going to do that song,” and he ended up doing it! So I was really, really happy and really excited.”

This marks the rappers first single of 2021.

Watch the music video below.