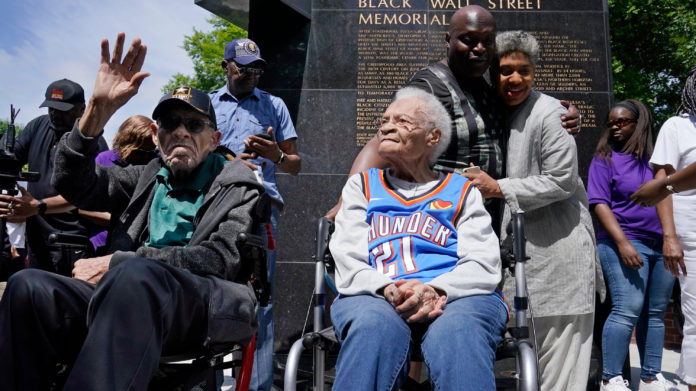 The three living survivors of the 1921 Tulsa Race Massacre, Viola Fletcher, Lessie Benningfield Randle, and Hughes Van Ellis, are slated to receive $100,000 each from the nonprofit Justice for Greenwood.

“This gift for the survivors of the Tulsa massacre shows that we have the power to demand justice for Black communities in Tulsa and all across the country,” Justice for Greenwood Foundation founder and executive director Damario Solomon Simmons said, according to Bin News. The gift extends from a partnership between the Foundation supporters, Color of Change, and national fundraising.

The trio recently testified before Congress, asking lawmakers to acknowledge the tragic depth of racial violence in America and its current societal repercussions.

“I still see Black men being shot, Black bodies lying in the street, I still smoke and see fire,” Fletcher detailed to Congress last month. “I still see Black businesses being burned. I still hear airplanes flying overhead. I hear the screams. I have lived through the massacre every day.”

Fletcher’s younger brother, Van Ellis, explained to lawmakers how the massacre destroyed their family. “We were made refugees in our own country,” he testified.

Although only children at the time of the massacre, the siblings vividly recall the horrendous violence that left their family in shambles. Now a 100 years later, Viola Fletcher, 107, Lessie Benningfield Randle, 105, and 100-year-old Hughes Van Ellis use their testimonies to help lawmakers understand the reality of racial violence.

Last week, a centennial commemoration was held to honor the victims and survivors of the 1921 Tulsa Race Massacre. President Joe Biden spoke at the event. During his speech, President Biden unveiled a multi-part plan that will address economic inequality stemming from racial violence in the late 19th and early 20th centuries.