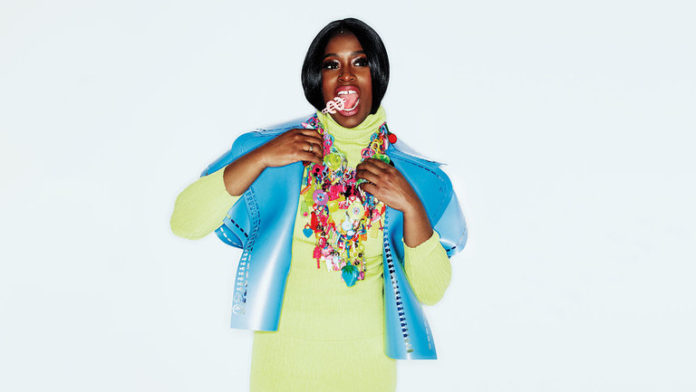 Tierra Helena Whack is an rapper, singer, and songwriter with a focus on Hip-Hop and R&B styles. As a teenager she went by Dizzle Dizz, but converted her stage name to her birth name in 2017. Her debut studio album, Whack World, was released in May 2018 and put Whack on the map as a vocalist and artist. The Philadelphia native sat down with Variety and spoke fashion, new music and the new found confidence in herself and her craft.

Whack is a firm believer that her style represents her personality. “How I dress is how I’m feeling. It reflects me as a person, so I would say yes. I’m an artist. It all comes together. Most of the time, I’m in bright colors and want to be seen. Today, I’m all in black and am by myself, running errands, in a more serious chill mood. My look is me, all me.”

This makes sense as Whack and her stylist Shirley put together fun outfits that make a loud statement. We got a great display of this at the 51st annual GRAMMY’s Awards red carpet when she wore a colorful fur jacket and bold makeup to match.

As Whack prepares to go on tour this summer, she shared details on how she is preparing for the stretch across six countries. A recent campaign called What Whack Wears is a collaboration with Adobe, which gives fans the power to design an outfit for her to wear on her upcoming tour. Tierra Whack rocks some pretty creative clothes and no one knows creativity like Adobe. The collaboration gives the winner the chance to see their work on stage and two concert tickets.

“It was crazy. My first meeting with them was just one of the best conversations I’ve had. I take a lot of meetings now, but this was the funnest. Everyone was so open and cool. You could tell that it wasn’t forced. You can tell when you walk into these meetings, and they’re not really fans of what you do, or know you. In this room, though, I felt a personal bond with everyone. Yo, I want everyone in this room’s number, and I want to text you, and hang out with you – that’s how good that meeting went. It was a cool vibe. I loved seeing the look on at their faces as they took down all of my ideas. We were ping-ponging,” Whack said about the Adobe team. It doesn’t go unnoticed that this 24 year-old is now someone important in the fashion industry.

All though fashion is a huge part of her career, we can’t forget about the music. Whack has used music as a tool to get through hard times and we can hear how personable she has gotten with her sounds over the years. Pulling from inspiration like Missy Elliot, Whack is in the studio working on her newest album but is taking her time with the process. As of right now there is no deadline on when the album will be complete.

“Life is crazy. It’s not always going to be good, or always bad. There’s some balance. If it ever feels overwhelming, like it is getting to be too much, I need to continue to create my own utopia. That’s what I do to keep going, you know? We all have our own strategies. Different things we do to push ourselves. Me creating my own songs, I’m always creating my own world. My own worlds. That’s just what keeps me going.”

As this artist continues to make a name for herself, she stands on the fundamentals like loyalty and communication to keep her going. Even on the hardest days she finds happiness in what she loves and spreads that positivity to her fans. She is the definition of style, talent, and swagger!