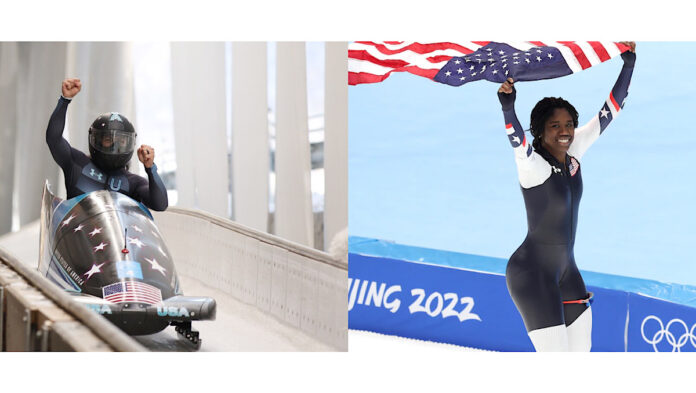 The 2022 XXIV Olympic Winter Games is being held in Beijing, China where women of color are making History at the perfect time aligning with Black History month. We take time to acknowledge and celebrate women of color where most of them are representing their countries for the first time.

To understand how far we have come, you first have to learn the history. Debi Thomas became the first Black athlete to have won a bronze medal in figure skating at the winter games while she was a student at Stanford University in 1988. She still is the only African American woman to win a medal in figure skating. She has become a staple for women in sports and has set the path for Black women who share similar dreams. Vonetta Flowers was also another woman who made history in the 2002 winter Olympics, who represented team USA in the two woman blob sleigh competition. In 2018 Akwasi Frimpong and Sabrina Simander were the first to represent their countries in the winter games. Frimpong represented Ghana while Simander put on for team Kenya. Simander was also the only athlete representing the country that year.

This year women continue to make their own path. Starting with Elana Meyers Taylor, she won silver in the first women’s monobob event. Erin Jackson made history again when she became the first Black woman to win a solo medal in speed skating after coming out victorious in the 500m event. Elana Meyers Taylor started making history in the Winter games in 2010 when she became the first U.S athlete ,male or female, to get a bronze medal as both brakeman and driver. In 2018, Erin Jackson became the first Black woman to be on the U.S. long track speed skating team just after only having four months prior form learning this sport. Jackson actually did not qualifiy when she ranked in 3rd place at the recent U.S. Olympic trials in Milwaukee. Her teammate Brittany Bowe ended up giving up her slot so Erin could qualify for this year’s Winter Olympics this year in Beijing.

Congratulations to all the women in sports who are killing it at the 2022 Olympics!