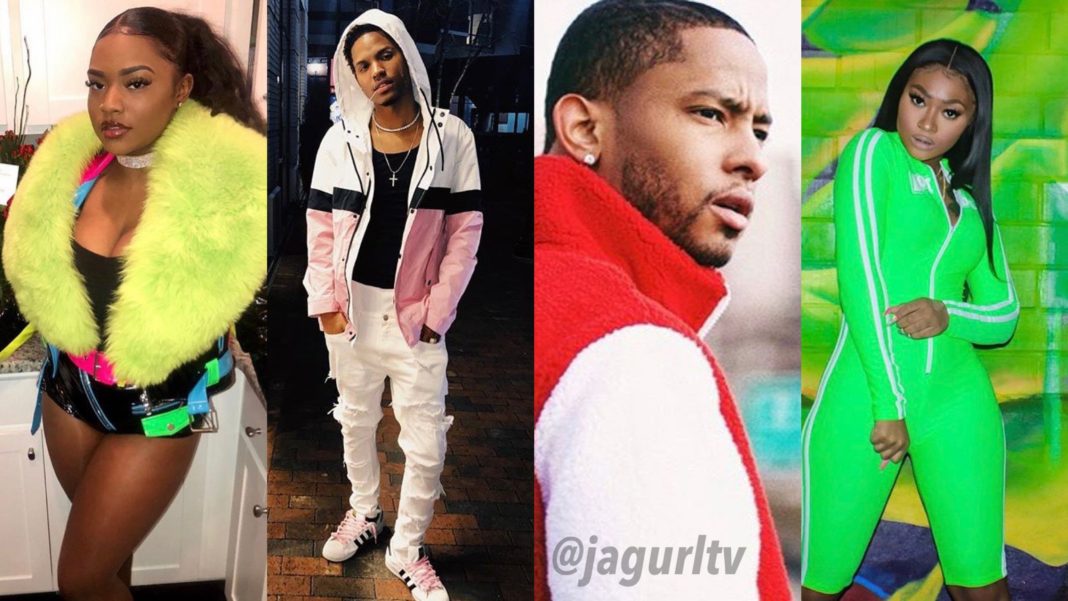 Every year we celebrate and recognize the love we have for our partner and our friends on Valentine’s Day. But the love expressed through R&B music lasts all year long.

The Love n’ R&B event, held at Center Stage in Atlanta, added spice and passion to an evening of love giving. Loud N Klear Ent., BMI and the SINGERSROOM brought a Valentine’s Day show that was like no other! Heart-wrenching songs were displayed by Summerella, Malachiae, Natalie Orfilia and more. An Atlanta original group, Hamilton Park were also center stage, making a comeback with their newly released album. Meet the artists who brought the house down and shared their love for R&B music on the center stage!

Social media has become a driving force for millennials to help jump start their career. Summerella is among those who chose to use platforms like Instagram as more than just a social app, but also as a business tool. She says consistency is key and posting every day at least 3-4 times a day. She has been able to build the foundation for her career in entertainment.

Her new single “Don’t Miss It,” is all about letting an old boo thing know his new boo can’t love better than she can.

Although she doesn’t like to refer to herself as a comedian, claiming, “I’m just goofy as hell. It’s just my personality. I would never do stand-up comedy because I would f****** get boo’d off. I guess you could say I’m just an entertainer,” she says. She definitely makes some, if not all 3.2 million (and counting) of her followers laugh.

Expect an album from Ms. Summerella around May.

YouTube is another great platform that is currently booming with talent and allowing creatives to share their work.

Malachiae started his musical journey by uploading music covers on YouTube which allowed him to establish the foundation for his career. “It gave me a sense of hope. Just putting that out there and getting the reaction from people. It just allowed me to believe in myself more and just put out some original music. It was a great outlet for a bigger cause,” he says.

He believes his music sets him apart by being his authentic self. He also stated that, “Signing with Motown Records has been one of the greatest highlights for me thus far.” But he knows that it doesn’t take away from the fact that he still has to grind.

You can expect real music that people can feel from Malachiae this year.

As a musician, it’s important to release and share your work on a consistent basis. Felixx has maintained his presence on camera from being a performer on the show, The Four, and recently released three songs all within a month!

He describes his music as, “A fuse between trap influences and smooth harmonies.” And with his latest track, “Can We,” he delivers just that.

His experience on The Four allowed him to overcome any inch of stage fright he had in his body. As he expresses, “Being in that environment and executing on that stage in front of 8 million people, it felt amazing for me and my team. It’s a good feeling. It’s a blessing,”

He also had the opportunity of opening for Diddy in front of 90,000 people at Essence.

Follow Felixx online @felixxmusic to see the dope things he has lined up and the release of his EP coming soon.

Finding your individuality can be tough in the music industry. Natalie Orfilia tackled that stigma by gaining experience from being a part of multiple girl groups, and applied what she learned to her solo career.

Her latest single, “You on You,” tells a sweet story of being bad karma. “Really it’s just a revenge record. Sometimes you get that feeling like, ooooh I wish I could do that to you. With this song, you get that,” she said.

You can expect an EP and new visuals from Natalie this year. “I just dropped a visual, go check that out and go follow my journey @natalieorfilia,” she says. You can also expect her touring the end of this year.

Being fearful and not chasing after your dreams is becoming a things of the past. Timid girl turned creative woman, Arabian is ready to share her voice with the world.

In her newly released debut album, “The Story,” she wants people to be inspired to follow your dreams no matter what you’re going through and don’t try to shadow somebody else’s dream. “Have your own dream and just work to your fullest,” she says.

After moving to Atlanta, she realized she had a real chance in the music industry and being shy wasn’t going to get her far. “I can do it too, I should just try it. I’m never going to get to where I want to be if I don’t just follow my dreams,” she claims.

Be on the lookout for two new videos and a project dropping soon from Arabian.

A lot can happen in six years. It can be a time to plan, set goals, and reinvent. Hamilton Park took that necessary hiatus and used it as fuel for their latest album titled, “It Was Necessary.”

The group assures they’re back and ready to conquer, as Anthony says, “We just had to come up with a concrete plan. We had to set the vision. We took a step back, had a moment to analyze the situation and come up with a concrete plan and now we’re executing that plan. The hiatus really wasn’t a hiatus, it was necessary- which is the name of our EP that’s out on all platforms.”

Get ready to be blown off your feet by their in sync harmony as the three prepare to drop their upcoming project in the spring/summer.

Follow Hamilton Park on Instagram @thisishamiltonpark. Make sure you go get their EP on all major streaming platforms.

Taking a leap of faith is a crucial step in going after your dreams. Josh Waters left his hometown of Mississippi to pursue what he describes as, “His purpose in life.”

His latest track, “Dipped in honey,” is the expression of showing appreciation to women of color, without sexualizing them. “I feel like there’s not enough of us telling yall that you’re beautiful and nothing else,” he says.

For those unsure about how to navigate as a rookie in the music industry, Josh offers, “Stay true to yourself. Stay the course and remember faith without works is dead. Faith is believing what you can’t see so just stay down.”

Follow Josh @joshwatersmusic to keep up with him and be sure to check out his upcoming project which is expected to be released on his birthday, February 26th.

The night was filled with love and true R&B music as the artist hit the stage to showcase their artistry. There’s something truly inspirational about being young, knowing what you want, and doing everything in your power to make that desire come to life.

By: Dose of Dallas