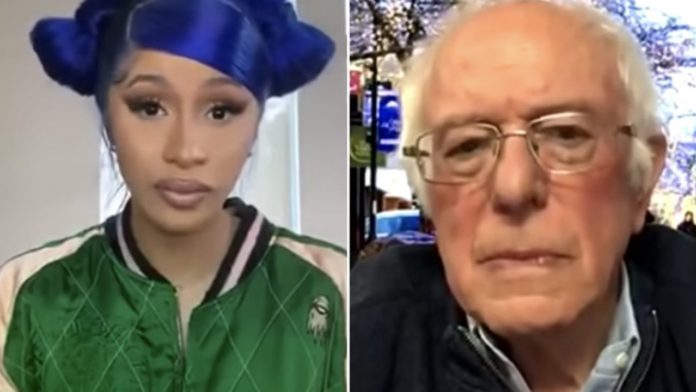 During our days of quarantine, Cardi B has been going on her IG Live to keep us informed in an entertaining way. Her infamous funny personality is accompanied with knowledge about the government, COVID-19, and the upcoming presidential election. Cardi has made it a point to say that she is disappointed that her favorite candidate, Bernie Sanders, dropped out of the race. News broke on April 8th, 2020.

“UNCLE BERNIE!” Cardi greeted as she added Bernie Sanders to her Instagram live. After a little light banter back and forth, Cardi got down to business. “I had a fit because I was so hurt and upset that you dropped out of the race and everything. I was upset because, you know, because I be looking on twitter and I be looking on my Instagram, and I know there is so many people like the youth who support you.. SO MUCH.” Cardi stated. It was informed that on top of all the expenses it takes to run a campaign, he also stepped back because he wanted to focus on his role as a Senator of Vermont to help ease the coronavirus pandemic.

Bernie replied, “A lot of people are hurting tonight. People have lost their jobs and they are worried how they are going to provide food for their families, how they are going to pay their rent, pay their mortgages, and in congress some of us are trying to deal with those problems as well.” Cardi had always been a big advocate for Sanders and uses her platform to encourage young people to vote. Now that he is out the race, Cardi wanted to know why we should vote for Joe Biden.

“When I announced I was running for president, there were like 18 people running. What I said was if I don’t win, and I will try hard to win, I will endorse the democrat that wins because Donald Trump to my mind is the most dangerous president in the history of America. This is a guy who lies all the time, he doesn’t believe in science, he downplayed this whole coronavirus which has lead to the deaths of many thousands of people, he doesn’t believe in the constitution and things he is above the law, so this is a bad news guy that has to be defeated.” He continued by saying, “What I am also trying to do is to work with Joe to see that he becomes a more progressive candidate. In other words, what I want to see him stand for, which he will, is the raise the minimum wage to at-least 15 bucks an hour to make sure all of our young people have an opportunity to got to college regardless of their income.”

According to Sanders, Biden is going to surprise us with the progression he has made towards his plan to cancel student debt, immigration reform, criminal justice, and more.

The duo admitted that they could go on forever about their conversation on how to help the American people. Between the lines of the light humor, there is also the frustration of Donald Trump, WE are in for a ride and this country will be impacted for a long time.