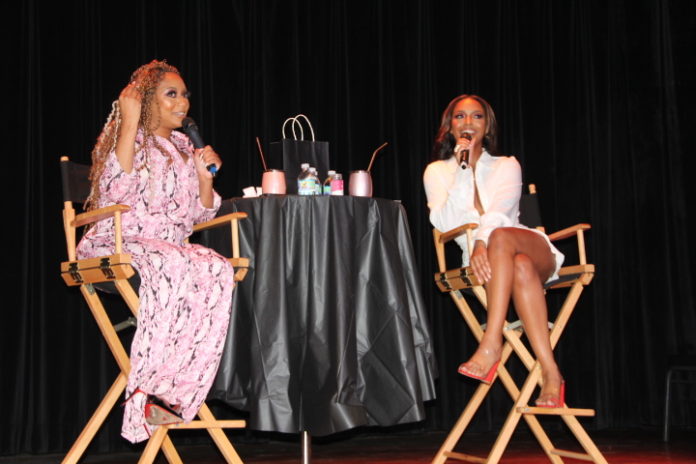 This past weekend JaGurl TV got the chance to listen in and also experience some of the wildest, dirtiest, sexual discussions between Cocktales host Kiki Said So & Medinah Monroe. This two-night sold out event in Downtown Atlanta consisted of discussions about sex, dating, hoe bag necessities, toys and of course more sex. Interacting with their guest and crowd through various competitions such as who can suck penis the best, to opening the floor up for woman and men to share their most intimate experiences. With this being Kiki Said So & Medinah Monroe first ever live podcast they definitely set the bar high and you know JaGurl TV had to come through with the exclusive interview.

According to Kiki when asked in an exclusive interview about the COCKTALES DIRTY DISCUSSION idea, she stated “It wasn’t about educating woman, it was about the stuff we are going through, we are not the only people who go through it. We have these experiences and we are going to share them. Maybe other people can relate and maybe other people can’t. We’ll share what we have learned but we are not educator’s or experts. We are just sharing our truth”. When asked about how long have they been conducting COCKTALES DIRTY DISCUSSION, both ladies stated “ Three years” and according to Medinah “we have been fucking longer than that”.

When asked about how did they feel about hosting their first ever live COCKTALES DIRTY DISCUSSION Medinah stated in the most passionate way “It feels amazing, Kiki and I have been wanting to do this for a very long time, we love recording weekly but doing it live in front of  audience and getting to see everyone’s expressions and really getting to talk to you. It’s just really amazing, it almost feels so real”. Adding in to the questions Kiki stated “ I cried in the hallway before we went on stage because I peeked out at the audience and was like wow all these people brought tickets two nights in a row to come and see us”.

Cocktales host Kiki Said So & Medinah Monroe has definitely brought a new meaning to the Awith their COCKTALES DIRTY DISCUSSION. If you want the raw, uncut, truth about sex or want to hear about their experiences head over to their YouTube channel at https://www.youtube.com/c/kikisaidso and subscribe. It’s definitely a podcast you don’t want to miss.