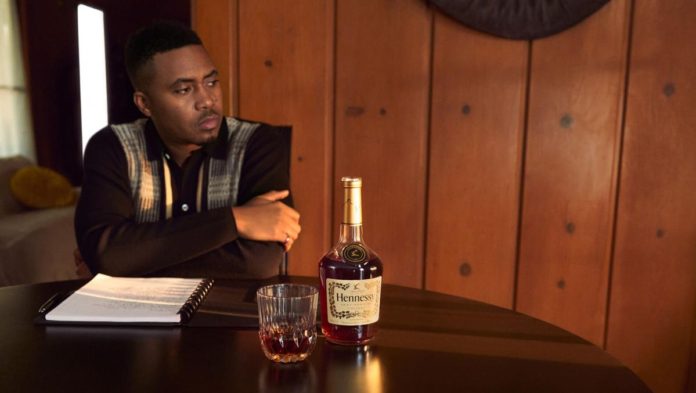 Hennessy, the number one cognac in the world, continues its partnership with Nas with their latest campaign, “Never Stop Never Settle Society,” to encourage Black entrepreneurs.

As part of the Marcus Graham Project, the joint venture will provide opportunities for the next generation of Black entrepreneurs.

The rap legend pens a letter to his daughter titled “Dear Destiny” to introduce the brand’s new initiative. The two-minute commercial aired during the 52nd NAACP Image Awards on BET.

In the video, Nas narrates the love letter to his daughter, highlighting the importance of Black entrepreneurship.

“Dear Destiny, standing still scared to death, holding you in my hands, I knew,” Nas says in the commercial. “I wanted you to see something I never saw; feel something our family had never grasped: Black excellence.”

“Something like the Greenwood District in Tulsa, Oklahoma, 1921, 40 acres and 35 blocks of Black folks running the town,” he continues. “Lawyers, doctors, businesses, all Black-owned. Imagine that. The vision of Black Wall Street was intentional, and so was its downfall. Why, Destiny?”

“Autonomous Black folks living this good. They took the city by force. And burned it straight to the ground,” Nas says. “A hundred years later, a hundred years strong. Destiny, you knew a spirit that powerful could never be held down. Black excellence lives on, and those spirits, they never stop; they never settle. Black women building, Black men thriving. Destiny, believe in Black creativity, Black wealth, our potential, our people. Wherever Black folks dream, the spirit of Greenwood is there. So find them, build with them, dream with them, be your own Black Wall Street however and wherever you imagine.”

Watch Nas’ powerful letter to his daughter and the entire Black Community below.

According to BET, Montgomery made history by becoming the first former WNBA player to become a WNBA team franchise owner of the Atlanta Dream.

As one of the NAACP’s first corporate sponsors, Hennessey’s initiative seeks to strengthen it’s commitment to the Black community.

The partnership will provide Black entrepreneurs with specific needs and resources to elevate their social impact on the Black community.

Moet Hennessy USA and Marcus Graham Project executives will base their selection on the applicants whose business ventures can be accelerated and tuned.