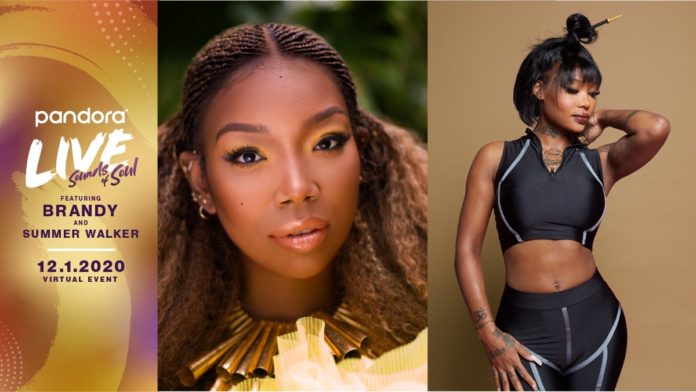 Pandora has announced that the powerhouses of R&B, Brandy and Summer Walker, will perform for Pandora LIVE Sounds of Soul on December 1st at 9:00 pm ET/ 6:00 pm PT. This is the fourth event in the popular virtual series that features top artists from all genres, including country, rock, R&B and more.

Brandy has helped inspire and open doors for Black women all over the world. Pandora LIVE will highlight her legacy as a role model and artist who helped define a generation. Pandora LIVE will also shine a light on the newest Black female powerhouse – superstar R&B singer/songwriter Summer Walker. The Atlanta native continues to generate buzz while still reeling from the success of her 3x platinum breakout single, “Girls Need Love.”

Michel Wright, the on-air personality from SiriusXM’s Heart & Soul, will host the evening, and do an in-depth interview with Brandy. An animated short based on a real event from Brandy’s life and a flashback segment of Brandy reminiscing about photos from her past will round out the evening. Select Brandy fans will have the opportunity to participate in a virtual meet and greet with the singer prior to the performance. Additionally, SiriusXM’s Heart & Soul will rebroadcast Brandy’s performance and interview on Sunday, December 27that 4:00 pm ET / 1:00 pm PT.

Brandy’s first studio album in eight years, b7, was released on July 31 to critical and fan acclaim, debuting at #1 on the Independent and Current R&B charts. Executive produced by Brandy along with DJ Camper and LaShawn Daniels, the 15 track confessional is her most personal to date as she debuts her writing skills for the first time in her career. The album features Daniel Caesar, Chance The Rapper, and her daughter Sy’rai Smith. Recently, Brandy teamed up with singer Monica in a highly watched VERZUZ battle.

“I’m excited to be part of Pandora’s Sounds of Soul, especially being able to connect with my fans in this unprecedented time,” said Brandy. “Thank you for this amazing opportunity to perform.”  Summer Walker echoed the sentiment stating “Thank you Pandora for allowing me to be a part of Sounds of Soul.”

Summer Walker’s Platinum album Over It contains the Platinum certified single “Come Thru” and the double Platinum hit single “Playing Games,” which has spent 20 weeks on the Hot 100 singles chart and is currently on the Pandora Top Spins Chart. Over It has spent 49 weeks in the Top 40 and 56 weeks in the Top 50 on The Billboard 200 Album chart. Summer recently won her first Soul Train Music Award for Best New Artist and a Billboard Music Award for Top R&B Female Artist. On the heels of covering Billboard Magazine R&B/Hip-Hop Power Player’s issue, Summer Walker is also nominated for five Soul Train Music Awardsthis year and is currently in the studio working on new music.

Sponsors will support Pandora’s event celebrating Black female artists by curating content and activities to provide a unique viewer experience. Pandora and McDonald’s will provide a charitable donation to The National Black Women’s Justice Institute and encourage viewers to show their support in reducing racial and gender disparities affecting Black women. During the show, Cricket Wireless will invite fans to test their artist knowledge with pre-show trivia, and Vaseline will provide a limited amount of exclusive artist merchandise for attendees on a first-come, first-served code redemption basis. For those looking for more music, McDonald’s is inviting fans to check out Pandora’s Black Music Forever station that honors Black rappers, singers, songwriters, musicians, and  entertainers.  After the show, the station will be updated to feature the live performance tracks from the event.

Listeners can RSVP for this free event HERE.