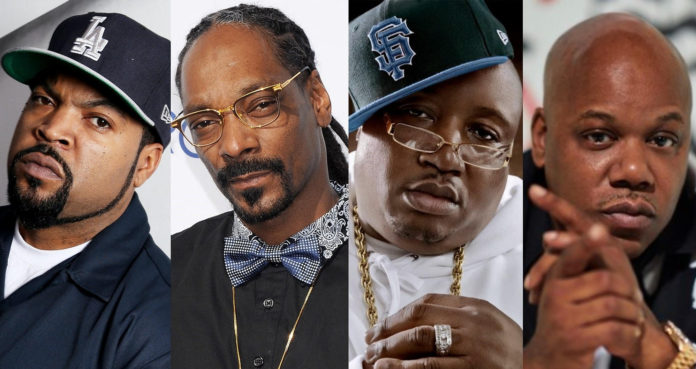 Four West Coast natives who are very prominent in the hip-hop industry are coming together with plans to release “volumes” of music, tours and complete other business ventures.

Rappers, Snoop Dogg, Ice Cube, Too Short, and E-40 are in the works of forming a hip-hop supergroup, Mt. Westmore. Too Short shared the news on March 16 during an interview with DJ Vlad.

Too Short assures audiences this isn’t a joke at all, in fact it’s more of a ‘business venture.’

“It’s not a thing that we dreamed up,” Too Short says. “It is a thing that’s really real.This is serious s–t and we did this because we wanted to do some business ventures together and we wanted to join forces to do future tours together as we release these projects.”

The rapper also recalls that during an interview with M.C. Serch, getting a call from E-40 and Cube, during quarantine, about putting an album together.

Speaking of quarantine, on December 19, 2020, E-40 and Too Short actually went head-to-head in a Verzuz battle, taking turns playing their legendary hits. Before, the battle, both artists had released solo albums and packaged them as a bundle of 20 total tracks. Too Short released his album Ain’t Gone Do It and E-40 released Terms & Conditions.

According to BET, Too Short also revealed in an interview with HipHopDX that Dr. Dre is going to be a part of the album. Dr. Dre is the album’s only feature and he’s already contributed.

We can’t wait to see what projects these hip-hop legends have in store for fans!