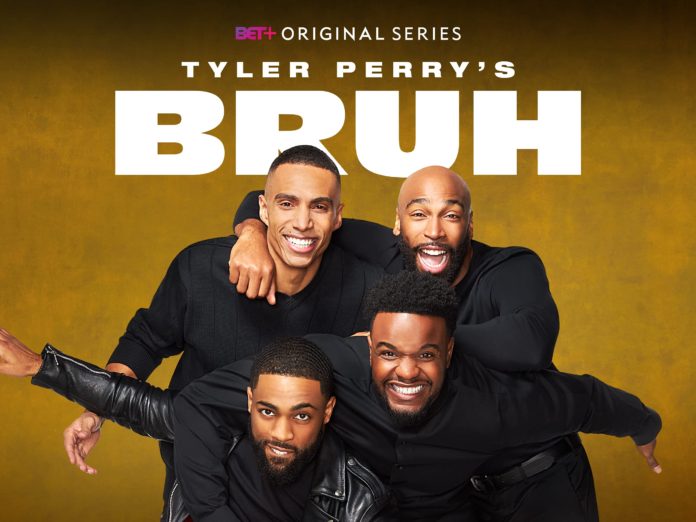 JaGurl TV sat down with the cast of “Tyler Perry’s BRUH” to discuss the trials and tribulations of friendships, recovering lost love, and the importance of diverse representation of Black men on screen.

Mahdi Cocci plays Tom. Tom is a doctor and the glue of the brotherhood. Throughout the season, Tom’s character acts as the voice of reason and the peacemaker. It is this authentic representation of friendship that Cocci admires about the show.

“It’s probably one of my favorite things about the show,” Cocci tells JaGurl TV. “It’s not a story that’s often told in tv or film. This type of black brotherhood that we share, but I think it’s common it exists in the world. I think that many people can relate to it when they watch it. Some of the best compliments I received are people from all ethnicities who come up and be like, ‘Hey, like Mike reminds me of this guy or like Bill is like my buddy da.da.da.da..’ And I’m like that’s so cool because that’s how I feel too.”

“The ups, the downs, the tragedies and triumphs that we go through, are just what friends go through,” says Cocci. “so it’s beautiful to be able to tell that story.”

And like all friend groups, not everyone always sees eye to eye.

At the beginning of the first season, bonds are strained once John returns to his group of friends asking for another investment. After investing thousands into opening John’s sandwich shop, A&J’s , Sandwich Shop, and not receiving their money back the group is weary of investing in another one of John’s dreams. Fed up with always saving his least successful friend, Mike and John’s friendship faces ups and downs throughout the season.

“Mike and him [john] clash because Mike is like ‘go stand on your own two [feet], and I’ll support help you after that’ says Barry Brewer as he describes his character’s John relationship with Mike. “But that’s his plight with John. And he believes John is capable of it. It kind of like that tough love.”

“You know eagles, drop their kids from the sky. They take them really high, and they let them go,” explains Brewer. “I think Mike thinks that that’s going to be the success for John. It’s not that he doesn’t love him. He knows that John has the capability, but he’s scared.”

“I think Mike doesn’t think that Mike can do anything wrong,” shares Phillip Mullings Jr, who plays Mike. “So he can look at everyone else and be like ‘man, you just need to do this…or if John could just…’ Mike can’t see that he has his own issues. He’s hard on everybody. He lacks empathy.”

For Mike, season two is a soul-searching journey where he realizes the depths of his own emotions and the importance of friendships.

“I think season two he [Mike] is really figuring out that he can’t go through life guarded,” says Mullings. “He can’t be his most true and authentic self, having those guards up, and I think those guards come from past hurt. I think he actually takes the time to explore that hurt throughout season two.”

“It’s not a pretty process,” warns Mullings. “It’s not pristine and tightly wrapped. But he does go through that process with the help of all of his friends.”

“But that’s the greatness about this show that I do love,” Brewer explains. “Every relationship between us is such a realistic relationship, to its T.”

The realness depicted between the trials and triumphs of the brotherhood is also depicted through all the relationships within the show. The show dives into the relationships between John and his mother, Tom and his coworkers and Bill and his ex-girlfriend.

Bill (played by Monti Washington) runs into his former college classmate, Peter, at John’s sandwich shop. After a little small talk, Bill discovers that his ex-girlfriend Regina is engaged to Bill’s former classmate. As Regina begins to take the next step in her life, Bill battles with his conflicting emotions and wonders if she could have been “the one.”

“I think a lot of men might be able to contest to this,” explains Washington. “This is my perspective. I believe for a woman, there are a handful of ‘the one.’ There are a handful of guys that if they play their cards right and they do certain things, a woman could marry them. I think for dudes, there’s a lot less.”

“Now there’s a lot of women dudes would sleep with,” Washington continues. “But I think our number of women that we are really willing to spend our life with, you got to be different, you have to be special. I think it’s a very unique thing. And I think for Bill it’s like ‘Dang, I made all these mistakes and once I saw she was about to go away for good, for forever, it’s like oh, you wake up.”

“So, does he really love her? Absolutely, He absolutely loves Regina,” Washington says. “But also, like a lot of men struggle with, you love her, but you got these peripherals on the side. You’re seeing what you’re gaining from being in a committed, loving relationship. But you’re also seeing what you’re missing out on by being able to play the field, and that’s very enticing for a lot of men. I think Bill just doesn’t know what the hell he wants.”

“Bill got to man up, I’m not going to lie,” Washington admits. “But this second season gets a little messy. If you thought it was messy the first season, it gets messier.”

Be sure to watch the brotherhood maneuver through life, love, past hurt, and attempt to keep their friendship entact in Tyler Perry’s BRUH season two available now on BET+.

Watch the sneak peek of season 2 below.