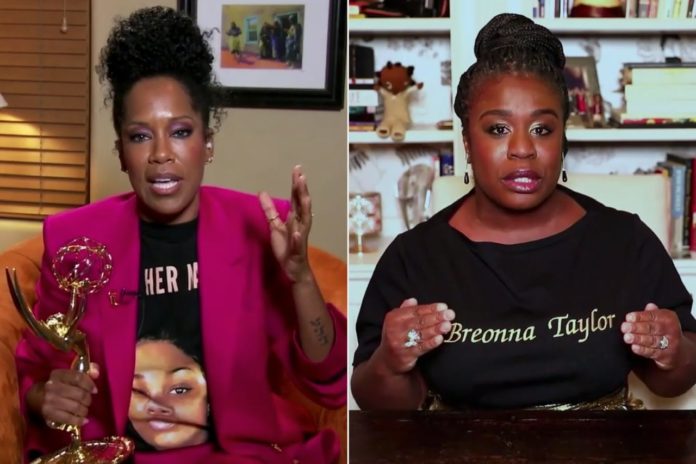 During the 72nd Emmy award show that recognizes excellence throughout the entertainment industry, Uzo Aduba and Regina King reiterated a powerful message to the world while accepting their awards. Both of the women can be seen wearing shirts in tribute to Breonna Taylor during their respective acceptance speeches at the Emmy Awards on Sunday.

On March 13 2020 Breonna Taylor, an EMT, was killed when Louisville officers entered her apartment under a “no-knock” warrant. In recent news the family of Taylor will be set to receive $12 million from the city of Louisville, which is the largest civil settlement in the history of the city.

Regina won the award for outstanding lead actress in a limited series or movie for her role in “Watchmen.” She is seen wearing a shirt with Breonna Taylor’s face. Uzo Aduba who received the award for outstanding supporting actress in a limited series for her role in “Mrs. America,” wore a shirt with Taylor’s name written across in gold lettering.

During Regina’s speech she takes the time to show appreciation to her team and everyone around her, but urges the people to “have a voting plan, go to ballotpedia.com vote up the ballot, please go to ballotpedia.com and find out who are voting in your municipal elections, it is very important, be a good human, rest in power RBG.”