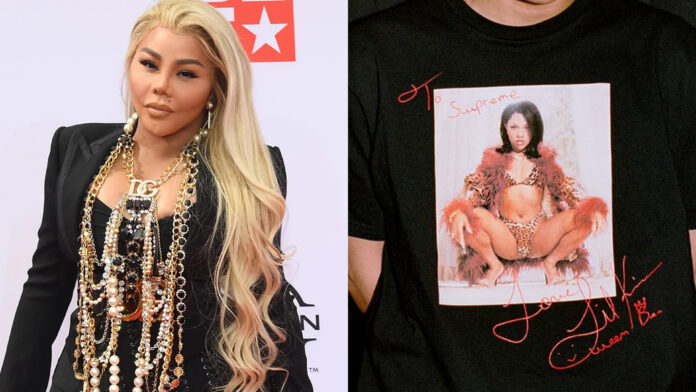 Kimberly Denise Jones is most commonly known by her stage name, Lil’ Kim. She is an award-winning and multi-platinum Brooklyn, N.Y.C. rapper. After being first discovered in 1994 by fellow late rapper, The Notorious B.I.G., she would then join his music group, Junior M.A.F.I.A. Following their success and hers as a featured artist on various tracks of the original group, it was only natural for her to release her own debut album, Hard Core, in 1996. Hard Core has since reached certified double platinum, selling over 6 million copies worldwide, simultaneously cementing itself as the highest U.S. debut from a female rapper at its time. Jumping through time to April 14, 2022, Lil’ Kim and Supreme collaborate on their spring collection clothes drop.

Supreme, the New York City streetwear brand, was founded in 1994 and initially dedicated to skateboarders and skate culture. However, since its inception, they have graciously been indoctrinated into the hip-hop culture with many fans of the brand, including artists like the Wu-Tang Clan, Dipset, Nas, Tyler The Creator, and of course, Lil’ Kim. For Supreme’s 2022 spring collection, they have collaborated with their native, Lil’ Kim, for limited edition t-shirt designs paying homage to the artist’s world smashing debut album, Hard Core. The T-shirts will be comprised of artwork, photos, and text prints of the album’s famous visual and the legendary rapper’s notorious squat pose.

Supreme’s Spring 2022 Tees will be globally released on the brand’s official website, SUPREME.COM today, Thursday, April 14, at 11 am.