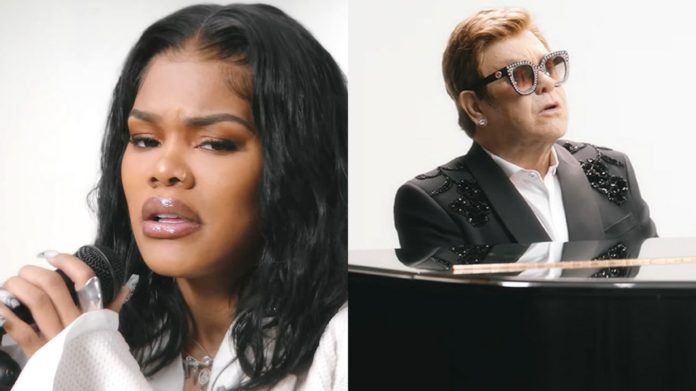 “‘Lose Each Other’ is such a special record for me, and I wanted the visual to feel just as big,” says Taylor in a statement. “I told my team ‘you know what would be dope? If I could have Elton John open the video on the piano!!'”

The legendary singer Elton John was ecstatic to be featured in Taylor’s music video since he has been a fan of hers since her debut album, “VII”. John says after Taylor appeared as a guest on his Rocket Hour, he “fell in love with her original spirit.”

John took to twitter to express adirmation for the Taylor.

“Aside from her brilliant music,” the legends writes in a tweet. “Teyana Taylor is one of the most visually dazzling artists in music today. I am a huge fan so I jumped at the chance to be in her new music video ‘Lose Each Other.'”

The tear-jerking ballad has simple but breathtaking visuals.

Taylor describes her inspiration for the video as “simple, yet powerful.” She continues, “which is why I choose an all-white background and bold looks. I wanted the audience to understand how love’s hardships can also be beautiful.”

‘Lose Each Other’ appears on the singer’s third album, The Album, which also includes features from Missy Elliott, Lauryn Hill, and Big Sean. A couple of months following the release of her album, Taylor won Video Director of the Year at the 2020 virtual BET Awards.

Watch the soulful ballad below.