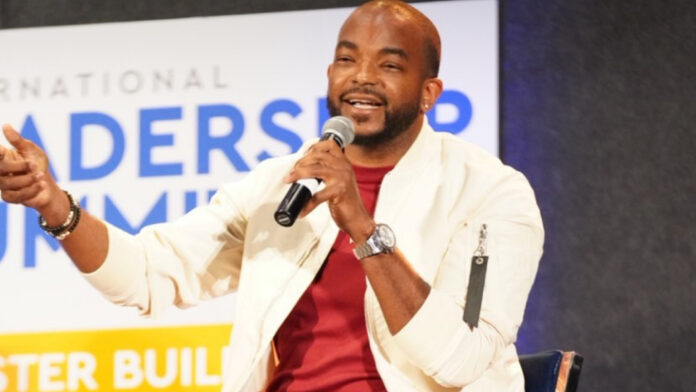 REVOLT media is the voice of the culture, engaging millennials and gen-z audiences. The platform was launched by Sean ‘Diddy’ Combs and Andy Schuon in 2013. Last year, 2021, the current CEO, Detavio Samuels, was appointed after serving as the COO in 2020. He ‘leads rockstar teams that do rockstar things.’ Rock stars indeed, Samuels was sought after to speak at T.D. Jakes‘ International Leadership Summit 2022 about the key composites to building a brand.

Samuels spoke on a breakout panel, ‘Brand-Building Basics‘ (BBB), alongside fellow speaker Ukonwa Ojo and moderator Lincoln Stephens. JaGurl TV caught up with Samuels at the conference in which he spoke on the future of REVOLT and black media enterprises, holding them to ‘high expectations.’

“REVOLT operates within a three-year run,” Samuels continues. “We are moving because we believe the time is now. You will see something that looks like a black Disney from REVOLT in three years max.”

Recently REVOLT expanded its ventures into Atlanta. “REVOLT is in Atlanta. REVOLT loves Atlanta. We see it as a mecca for black culture. It’s such a cultural hub.” He references their REVOLT Black News studio (RBN) project that launched in February. “We want to make the black perspective which has been invisible visible. We’re doing it in conjunction and partnership with the city,” he continues. “It’s another one of those things where we’ve laid the groundwork. We believe in the strategy and the vision, and now it’s the faith walk to see what REVOLT and Atlanta can build together.”

He concluded the interview with an elevating thought piece expressing his sentiment to encapsulate more than just media relations. “When black storytellers get to tell our stories to the world, and when we’re all making content, there is nothing you can tell me that can convince me that the world won’t be different.”